What happened when the Olympics gave out medals for drawing, music, and literature?

A lot has changed for the Olympics over the last century, mostly due to a shift away from amateur competitors to professional athletes. But entire disciplines have been tossed aside, too.

The Olympics from 1912 to 1952 weren’t just about sports, but art. Medals were given out for painting, sculpture, literature, music and architecture. The only caveat being that the pieces must be inspired by sport.

But a good deal of suspicion surrounded this outsider organization that suddenly began judging art. Songs were assessed by sheet music, leading to some confusion, and the medals were spotty—some years there were no winners at all, and in 1932, for instance, Josef Suk won silver for this song, though no first or third prizes were awarded.

In Amsterdam, 1928, the winning architect submitted his design for a completed project: that year’s Olympic stadium. That same year, a sketch of two rugby players won the gold in drawing. 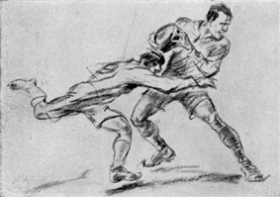 A Frenchman and International Olympic Committee president Pierre de Coubertin, submitted his own poem “Ode to Sport” under a pseudonym, winning Germany a gold in mixed literature in 1912.

Following a hiatus during WWII, an American named Avery Brundage took charge. He was passionate about amateurism, and maintained that the purity of the event was threatened if it were to be “swayed by the weight of money.” Because artists often sold their pieces after the closing, the events never return.

Recently the Olympics have given the arts another try. Since 2004 the committee has given significant cash prizes for sculptures and graphic design. But still, no medals yet.

Some highlights of the 1928 Olympics in Amsterdam: